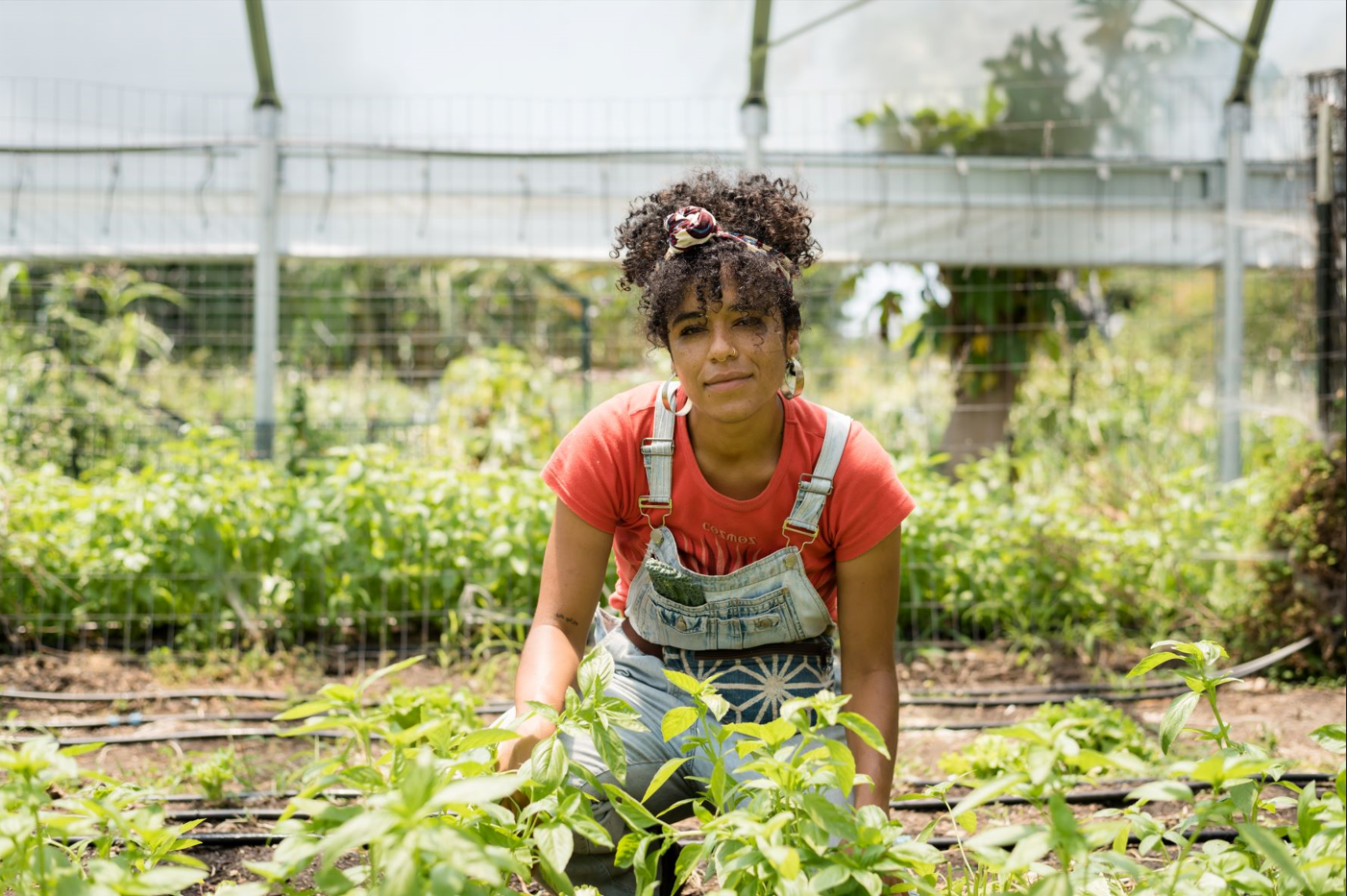 Nothing is more fundamental than food. It nourishes our bodies. It connects us to the land we depend on.

But fundamental as food may be, it is not equally accessible to everyone. In the United States, Black people and people of color are far more likely than white people to live in areas where the food is high-calorie and low-nutrient, prohibitively expensive, or hardly available at all. This is no accident; it’s the result of centuries of food apartheid, or racist policies and practices that have shoehorned Black and brown people into intentionally disinvested neighborhoods and severed their connections to the land.

It’s in direct response to this injustice that Ali Anderson founded Feed Black Futures: a nonprofit that purchases healthy food grown locally by Black and brown farmers and delivers it to Black mamas and caregivers impacted by the criminal justice system. The nonprofit also supports communities in growing their own food by installing gardens and conducting food justice and farmer training courses. One food box at a time, Feed Black Futures is building new foodways across pockets of California that have been left behind by our current food system.

Feed Black Futures is about health. It’s about racial equity. It’s about justice. But for Ali, it’s about more still. It’s about restoring the soul-healing connections to land to peoples whose land has been stolen.

A history of land and theft

It is impossible to separate the history of the United States from a legacy of stolen land.

Within just a few centuries of white settlers’ arrival in North America, an estimated 90% of the Western Hemisphere’s Native peoples would be killed and their land taken. With the rise of slavery, this theft multiplied: between the years 1500 and 1900, more than 12 million African people were kidnapped and sold into slavery, approximately 400,000 on American soil.

When slavery was formally abolished, Black Americans never received the “forty acres and a mule” they were promised in the Emancipation Proclamation. Realizing they could not count on the federal government, many worked to acquire their own land – only to have it taken away through racist land policy and lending practices that transferred 98% of Black farmers’ land to white landowners and white-led corporations over the course of a century. Having literally grown the food the country depended on, Black people were blocked from growing their own – even as white people prospered from the land they continued to possess.

In addition to these racist agriculture policies, decades of racist housing policies and practices – redlining, for example – have contributed to the net worth of Black families hovering around just one-seventh of white families. Just over 40% of Black adults own their homes, compared with 70% of white adults. For Black people that have chosen to return to the land, the statistics are even bleaker: Black farmers own an estimated 1% of the agricultural land in the United States, down from 14% about one hundred years ago.

Reconnecting people with the land

This traumatic legacy has severed long-held connections between Black and brown people and the land where they reside. Ali has made it her life’s work to restore that bond.

In a way, Ali’s entire career has led her to Feed Black Futures. She worked for five years as a community organizer in New York City, supporting primarily Black and brown communities impacted by police and state violence with issues related to housing, economic, and reproductive justice. But after years working in New York City, Ali felt burnt out and deeply disconnected from the land. "The city was no longer serving me,” Ali says.

“In order to support my healing,” she continues,  “I needed to dive into food work with a bit more intention.”

Ali’s time at Soulfire ignited what would become a lifelong passion for food and food justice. From Soulfire, Ali traveled to Source Farm in Jamaica – “Where my ancestors were taken to,” she describes – where she saw “how few Black Jamaicans have agency over how their food is produced, and how many do not benefit from the means of production.”

When the onset of COVID-19 forced Ali to return home to Southern California, she continued working in agriculture. She quickly realized that communities she deeply cared about were not receiving the food she was growing; literally, they weren’t receiving the fruits of her labor.

So shortly after the onset of the pandemic in 2020, with the support of fellow organizers Delaine Powerful, Arissa Hall, Jamilah Felix, and Meron Tebeje, Ali founded Feed Black Futures to directly support people in her community who were most impacted: Black farmers and Black mamas and caregivers  impacted by the criminal justice system.

Feed Black Futures uses grant money, merchandise sales, and donations to purchase food from a network of BIPOC-owned farms and create boxes of nutrient-rich, local food. They then work with community partners Essie and A New Way of Life to identify mamas and caregivers who are returning from incarceration or are caring or have cared for an incarcerated loved one. Lastly, they work with these partners to distribute food boxes to people across Oakland and the LA area. They also conduct virtual  food justice trainings, subsidize farmer training programs, and install gardens for families wanting to learn how to grow their own food.

One farm and one family at a time, Feed Black Futures is building a food system entirely controlled by Black people and people of color – people who had formerly been trapped in a food system that didn’t support their well-being.

Ali recognized that she couldn’t take on this work alone. So she joined the Black Equity Collective: a community-public-private partnership dedicated to strengthening the long-term capacity and infrastructure of Black-led and Black-empowering social justice organizations in Southern California.

Backed by a collective of funders, the Black Equity Collective granted Feed Black Futures $100,000 over three years – “huge for a baby nonprofit,” according to Ali.

But the network the Collective built was just as valuable. Says Ali, “Early on, I was like, ‘This is the last day of Feed Black Futures.’ The collective really provided community... I got to hear about the struggles, and I knew that I wasn’t alone.”

NFF believes that it’s essential to support community-centered organizations led by people of color, because communities that control their own resources can determine their own paths forward. That’s exactly why we’re offering personalized financial management assistance to Feed Black Futures and the other members of the cohort. This type of support helps organizations like these develop their infrastructure, make their operations more efficient, and ensure they can support communities long into the future.

“I was so stressed in the beginning because I did not know how to put together a budget,” Ali says. “Annie [from NFF’s team] didn’t just hold my hand emotionally, but also supported me in learning how to take care of the finances. She built a budget and worked with me tirelessly."

Too often, founders like Ali – who works another job and runs Feed Black Futures in her spare time – start with a great idea but can’t access the resources they need to sustain it. It’s critical that we support these leaders with the money, technical assistance, and emotional support they need to sustain their visions and achieve impact in their communities.

A seed that continues to grow

Feed Black Futures has only been in operation for two years. But they’ve already seen the impact of their hard work. Today, they support over eight BIPOC-owned farms and 200 people impacted by the criminal justice system.

Behind each of those numbers is the story of someone like Carolyn.* When her son returned home after eight years in prison, Carolyn knew that she needed to create a supportive environment for both of them to recover from this trauma. So she left her apartment in downtown Los Angeles for the high desert, where she could purchase land relatively cheaply and grow some of her own food. Feed Black Futures is supporting her with the farming training she needs to help her family heal.

“She's like, ‘I need to know how to lay irrigation, grow food, be able to have these tangible skills, because my son's life was already taken from him, and I need to be able to support him,’” Ali says. “One of the ways [she] can do that is by getting him land and being able to feed him.”

Two years into this work, the impact of Feed Black Futures is clear. “People have saved money. Their health has improved,” Ali says. “And people have thought differently about what it means to steward land and grow food, and the importance of that for their family.”

But Feed Black Futures is only just beginning – and Ali has big dreams for its future.

“I want to support folks in learning how to build gardens, sell those gardens at cost, and employ people to do that,” she continues. “A physical space, a jobs pipeline, and living wages.”

“I envision land for people to work on, feed themselves through, learn how to steward...a physical space in the future that involves teaching, healing, and – most importantly – getting people more food.”

Want to learn more about how we partner with organizations like Feed Black Futures? Visit the Consulting page of our website.

*Carolyn’s name has been changed to protect her privacy.