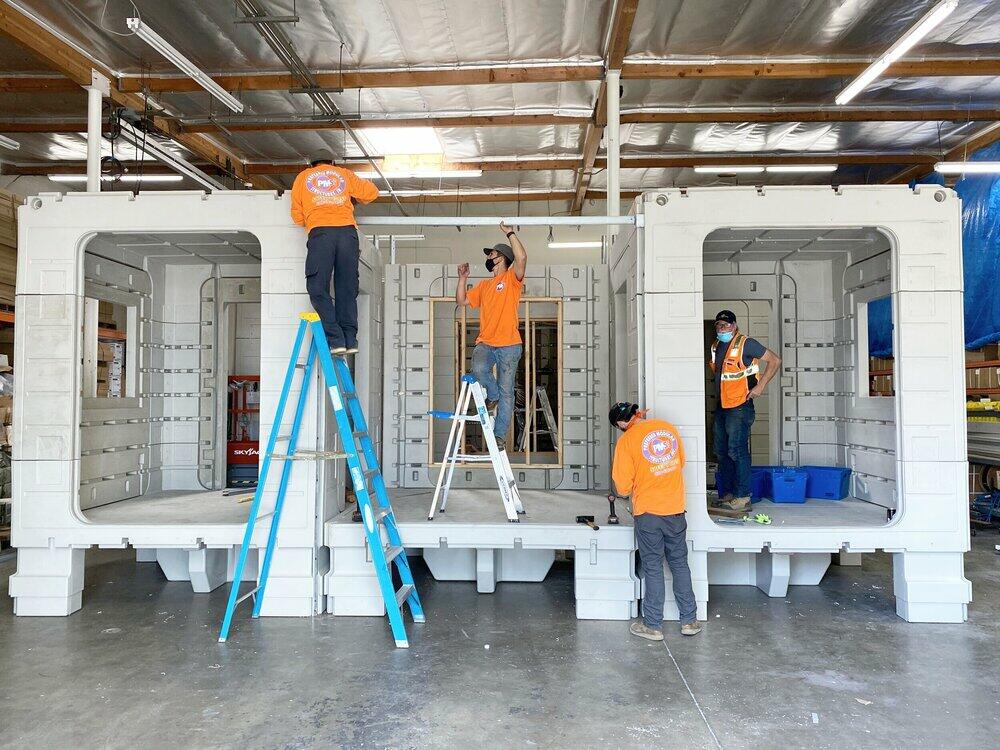 In contrast to the stucco homes that surround it in this town east of Los Angeles, the three buildings in this development are made of a sturdy plastic. And in a neighborhood full of single-family homes, this project contains three buildings on a single lot.

Tellingly, LifeArk’s CFO Paul Cho rarely refers to this project as a development. Instead, he calls it a “micro community.”

When the LifeArk team put the finishing touches on this project earlier this year, it marked their first-ever completed housing project. But for Cho and his team, it represents much more. The El Monte community is LifeArk’s proof of concept for a human-centered approach to housing that might make a dent in Southern California’s homelessness crisis – and help address housing issues around the world.

There are many reasons why Southern California has become of the most expensive places to live in the country. Among them, high construction costs mean that both affordable and market-rate housing developers are only able to build relatively few units of housing with the funding they receive – constraining the overall supply of housing and driving up costs for everyone.

When housing costs go up, people with lower incomes are the first to be affected. Despite having no control over the price of their homes, people are forced to move out of stable homes and into shelters, cars, or tents. In Southern California, this issue is particularly pressing: at the most recent count, more than 66,000 people were living unsheltered in Los Angeles County alone.

Originally, LifeArk was conceived as a solution for flood-prone communities in environmentally vulnerable regions. However, the LifeArk team quickly saw the potential for how this inexpensive, simple construction method could address issues of homelessness and housing affordability in their own backyard.

“If we can't solve the housing, we really can't make a dent in the homelessness crisis," says Cho. “So that's where I really started focusing more on, ‘how do we create more inventory?’”

LifeArk’s team understands there’s no magic wand that will solve this complex challenge. But by completely rethinking the way we approach housing and innovating at every stage of the home construction process, they think we can make building houses much easier – and address the supply-side issue that’s one of the core pieces of the puzzle.

An innovative approach to housing construction

LifeArk’s uniqueness, says Cho, “is in being able to reimagine what housing is all about.” He breaks the model’s innovation down into three separate pieces:

Thanks to these innovations, each unit of housing in the El Monte community was built for a third of the cost of a typical unit of affordable housing in California. And Cho thinks that they can do it for even less. “This was our R&D project, but also, the pandemic created a bit of cost overruns,” he says. “If we redid this project from day one, we would probably lower the cost of the total project by about $500,000.”

LifeArk’s commitment to human-centered design principles – and to the formerly unhoused individuals this project serves – is another important innovation. Having spent 13 years as the co-founder of homeless services organization Illumination Foundation before joining the LifeArk team, Cho was able to leverage deep relationships with unhoused individuals to have meaningful conversations about what they’d really like in a home.

Says Cho, “When we talk to the homeless, they value their bedroom space, but also, they all want their own bathroom because they view that as a very private space that they would like to have. So, we designed [the community] in such a way that every unit has their own bedroom and their own bathroom, but they share the community area, the kitchen, and dining,” Cho says.

“For the most part,” he continues, “individuals want to be part of a community. They don't want to live alone.”

Financing that aligns money with mission

After years of research and development, Cho and LifeArk founder Charles Wee submitted the concept note for LifeArk to L.A. County Housing Initiative’s Innovative Housing Challenge. They were one of five finalists to receive a $1 million award from the county to bring their concept to life. They used the award funding to purchase the land for the site; through our AIM Healthy Fund, designed to support California nonprofits that address the social determinants of health, NFF provided further financing to support construction and several years’ worth of permanent supportive services that will be provided onsite.

Partnering with a mission-aligned lender was critical to getting this pilot project off the ground – and Cho hopes that it will crowd in other funding in the future. “Our hope is that is that as we do more of these type of projects, that traditional banks will recognize that this is the type of project that they can lend to.”

And when they crowd in further investment from banks, LifeArk will be able to scale up – way up.

So far, says Cho, LifeArk has been committed to tackling “the issue of homeless housing, affordable housing, being able to produce inexpensive yet high quality housing, quickly.”

“If we can get to that point,” Cho goes on, “[we can] build housing in the Amazon, in Africa, in the other parts of the world where you need funding to be able to do those types of developments.”

“When people come and visit our project in El Monte, they go away thinking, ‘and you can do this with it, you can do that with it.’ There are so many different potential applications,” Cho continues. “The road ahead of us is really exciting.”

Mentoring the Next Generation of Women of Color Faith Leaders